Almost fifty rescue dogs competed for a $100,000 grant from national non-profit Petco Love for animal welfare organizations across the country

SAN ANTONIO, May 26, 2022 /PRNewswire/ -- While other dog shows feature purebred dogs competing for fancy titles and confirmations, one televised dog competition hopes to change the perception of what a champion is. The American Rescue Dog Show, which aired last night on ABC, is a competition for rescue dogs showcasing their personalities and unique nature. Winning dogs earn donations to the animal welfare organizations that offered the pets a chance at love and a home of their own. Petco Love, a national non-profit organization dedicated to changing lives, is thrilled to support the show's mission with over $200,000 in grants to animal welfare organizations represented in the show. 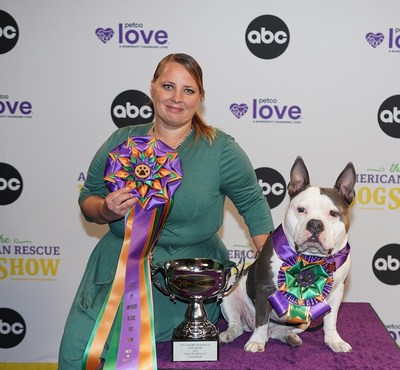 This year's winner, a pitbull dog named Capone, scored the championship title "Best in Rescue" for doing what he does best, snoring! Capone, representing San Diego Humane Society, won the title and the $100,000 grant for the organization after beating out six other sleepy, canine contenders. While pitbulls often get a bad rap in the press, The American Rescue Dog Show champion dog is a myth buster. Capone's outgoing and friendly personality, in addition to his signature snore, won over the celebrity judges which included Paula Abdul, Leslie Jordan, and Yvette Nicole Brown. Once living a life on the streets, Capone now enjoys napping in the sun, meeting new people, and yodeling according to his official show bio.

In addition to the Snoring competition, six other organizations were awarded $10,000 grants as a result of canine contenders in the categories of Best in Belly Rubs, Couch Potato, Ears, Fetching, Talking, and Underbite. The grants, all from Petco Love, will be used to help other dogs in need at organizations throughout the country. In case you missed it, watch The American Rescue Dog Show on demand and on Hulu the day following its premiere.

Susanne Kogut, President of Petco Love, offered "Petco Love is so excited to see rescue dogs spotlighted on a major platform like ABC and Hulu. We are thrilled to support the American Rescue Dog Show through our life-saving grants. Everyone wins when you adopt a pet!"

The American Rescue Dog Show co-creator and Executive Producer Michael Levitt, adopter of three pitbull mixes of his own, feels that the winning dog, Capone is a goodwill ambassador for the breed. "If our show inspires more people to adopt pit bulls like Capone from shelters, or any dog in need, it will be a dream come true. Adopters of shelter pets are true champions."

About Petco Love
Petco Love is a nonprofit changing lives by harnessing the power of love to make communities and pet families closer, stronger, and healthier. Since our founding in 1999 as the Petco Foundation, we've empowered animal welfare organizations by investing $330 million in adoption and other lifesaving efforts. We've helped find loving homes for more than 6.5 million pets in partnership with Petco and organizations nationwide. Our love for pets drives us to lead with innovation, creating tools animal lovers need to reunite lost pets and lead with passion, inspiring and mobilizing communities and our more than 4,000 animal welfare partners to drive lifesaving change alongside us.